The 2012-2013 Texas Bluebonnet list is complete!  The Texas Library Association creates this list for grades 3-6 to encourage reading.  If you read 5 of the books listed below, you can participate in the big vote.
Here is their list with annotations.
Read Five Then Decide!

Arnosky, Jim. 2011. Thunder Birds: Nature's Flying Predators. New York: Sterling. Trade: 978-1-402756610.
Jim Arnosky and his wife traveled all over the country, observing and researching these majestic birds of prey. Filled with scale models of the wings, feet, and bills of these beautiful, fearsome hunters, this book is sure to engage readers with chatty, fact-filled text and gorgeous paintings.

Cardillo, Margaret. 2011. Just Being Audrey. Illustrated by Julia Denos. New York: Balzer & Bray. Trade: 978-0-06-185283-1, Library Binding: 978-0-06-185284-8.
Author Margaret Cardillo and illustrator Julia Denos bring the best qualities of Aubrey Hepburn to life for a new generation of readers. Just Being Audrey gives you an insightful and delightful view of the icon as a young girl, an actress, and a celebrity who used her notoriety to do good.

Deedy, Carmen Agra and Randall Wright. 2011. The Cheshire Cheese Cat: A Dickens of a Tale. Illustrated by Barry Moser. Atlanta: Peachtree. Trade: 978-1-56145-595-9.
Carmen Deedy and Randall Wright combine their talents in writing a delightfully British cheese-loving cat and literate mouse “tale.” Barry Moser’s drawings contribute images of the characters and settings that you will have a “dickens of a time” forgetting.


Durango, Julia. 2010. Under the Mambo Moon. Illustrated by Fabricio VandenBroeck. Watertown, MA: Charlesbridge. Reinforced: 978-1-57091-723-3, E-book: 978-1-60734-278-6.
On summer evenings, Marisol works at her father's music store. Through the stories and memories shared by friends and family who stop and visit, Marisol experiences the music and dance of Latin America.

Kennedy, Kim. 2010. Misty Gordon and the Mystery of the Ghost Pirates. Illustrated by Greg Call. New York: Amulet Books. Trade: 978-0-8109-9357-0.
Life in the town of Ashcrumb is anything but ordinary, especially if your parents own a store called the Dearly Departed Antiques Store and drive a former ice-cream truck with D.E.A.D. on it. Misty stumbles upon a mystery about the town’s secret past that is full of ghosts, pirates, and an adventure into the unknown.

Selznick, Brian. 2011. Wonderstruck. New York: Scholastic Press. Trade: 978-0-545-02789-2.
Rose is running away from home – to her mother and brother – while Ben is searching for his father with few clues to go on. Set in two different times and written in two different formats, Brian Selznick merges these parallel stories in a climax that explores deafness and the miracle of family.

Sternberg, Julie. 2011. Like Pickle Juice on a Cookie. Illustrated by Matthew Cordell. New York: Amulet Books. Trade: 978-0-8109-8424-0.
Eleanor is crushed when Bibi, her beloved babysitter, must move away to care for her elderly father. As she adjusts to life without Bibi, to a new babysitter, and to the start of the school year, Eleanor finds that change isn’t always as sour as pickle juice on a cookie.

Swaim, Jessica. 2010. Scarum Fair. Illustrated by Carol Ashley.Honesdale, PA: Wordsong. Trade: 978-1-59078-590-4.
Spooks and monsters and creeps, oh my! Beware…the Scarum Fair has arrived, with poems that will make you laugh or cry. Take a ride on the Scary-Go-Round, and maybe a bowl of cat hair stew may be found!

Sylver, Adrienne. 2010. Hot Diggity Dog: The History of the Hot Dog. Illustrated by Elwood H. Smith. New York: Dutton Children's Books. Trade: 978-0-525-47897-3.
This fast-paced picture book takes the reader on a madcap journey through the hot dog’s history from the ancient Romans to its modern vegetarian reincarnation. Cartoon art and sidebars set a rapid pace for all the fun facts about this popular kid food! 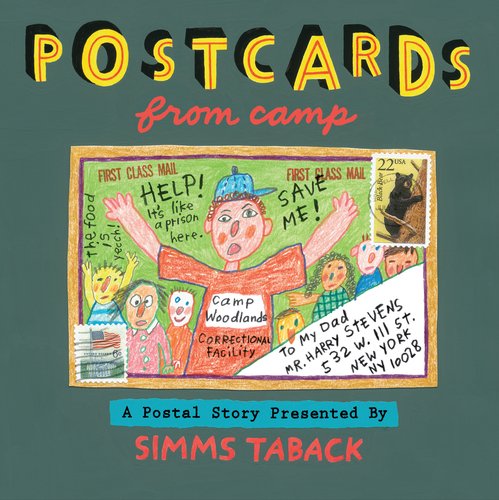 
Taback, Simms. 2011. Postcards from Camp. New York: Nancy Paulsen Books. Trade: 978-0-399-23973-1.
Michael’s first experience at sleep-away camp starts out as a very scary affair. He sends out a slew of urgent letters and postcards to his Dad in the hopes he will be rescued from his alien counselor, his prankster bunkmates, and the constant rain. His quick-witted dad replies with cool encouragement, reminding him that he met some of his best buddies at camp. As expected, all ends well!

Yohalem, Eve. 2009. Escape Under the Forever Sky. San Francisco: Chronicle. Trade: 978-0-8118-6653-8, Paperback: 978-0-8118-7874-6.
Lucy’s mother serves as the United States Ambassador to Ethiopia where she keeps thirteen-year-old Lucy close to home for protection. In Eve Yohalem’s first page-turning adventure, kidnapped Lucy must rely on her courage and knowledge of survival to escape and make it home safely.